When most people hear the phrase “City of Lights” they think of Paris. But when I hear a reference to the City of Lights, I think of the colorful central Vietnam coastal town of Hoi An, and its brightly, multihued buildings, French architecture and streets adorned with hundreds of lanterns of various shapes, sizes and colors lighting up the night.

When I hear a reference to the City of Lights, I think of the colorful central Vietnam coastal town of Hoi An. Pulse News Mexico photo/Larry Anthony Pannell

Traveling to Hoi An your adventure begins in Da Nang, which hosts the closest airport. I would suggest applying for your Vietnamese visa online. There is a Vietnam government website, as well as several private websites to assist you, I have used both. I would highly recommended paying the extra $25 — and it must be in U.S. dollars — for the assisted expedited service. If you do, on your arrival in Vietnam, you will be met by a representative who will help you bypass the long lines and goes directly into the immigration office, saving you a great deal of time and red tape.

I would also recommend considering spending a couple days in Da Nang, either at the beginning or the end of your vacation. The city is steeped in history and there are many interesting sites you can take in, from Marble Mountain to the Golden Hands and Dragon Bridges. Or you can just lay on the beautiful white sand beach that stretches for 20 miles..

Da Nang is only a 30- to 40-minute taxi ride to Hoi An, close enough to make a day trip once you are settled in your hotel. Most hotels will arrange for airport pickup and, depending on your length of stay, it might even be complimentary. If not, it is 250,000 Dong, the Vietnamese currency, around $10.

The biggest draw of Hoi An, and the reason why most people travel there, is the Ancient City, dating back to the 15th century. Pulse News Mexico photo/Larry Anthony Pannell

The biggest draw of Hoi An, and the reason why most people travel there, is the Ancient City, dating back to the 15th century. It sits on the bank of the Thu Bon River. From the 15th to the 19th century Hoi An was an important Southeast Asia trading port, and in 1999, it received the status of an UNESCO World Heritage site.

During what the Americans call the Vietnam War and Vietnamese call the American War, both sides agreed not to bomb or destroy the city. Because of this agreement, Hoi An has maintained its unique architecture of colorful buildings. In contrast, the neighboring cities of Hue and Da Nang saw devastating battles throughout the war.

Hoi An is known for the colorful lanterns which hang in dozens of shops and across almost every street, illuminating the night.

If you are lucky enough to be there on the full moon, you will witness the town’s Lantern Festival. Pulse News Mexico photo/Larry Anthony Pannell

If you are lucky enough to be there on the full moon, you will witness the town’s Lantern Festival. During the festival, the river is filled with lantern boats to close to capacity, with many boats nearly colliding, but like Vietnam’s street traffic, it is highly orchestrated chaos.

Hoi An is quickly becoming a “foodie” destination as well. With its multiple outstanding restaurants, many of which offer cooking classes for those who want to learn how to cook the local cuisine.

Vietnamese food is fresh, healthy and, for the most part, locally sourced from surrounding vegetable farms and herb gardens. Because of its close proximity to the ocean, Hoi An’s restaurants are always filled with fresh seafood.

Be sure to try the white rose dumplings, filled with shrimp or pork. The dumplings are made of rice paper and steamed in the shape of a white rose and are accompanied with a delicate dipping sauce of shrimp broth, hot chilis, lemon and sugar. What makes these elegant treats so special — besides their wonderfully aromatic taste — is the fact that they can only found in Hoi An. This is due to the fact that the unique water needed to make them comes only from the Ba Le Well, built by the Cham people in the 10th century. The Ba Le Well is also used to produce the town’s signature cao lau noodles, another dish you should try, used for centuries to produce traditional medicinal tinctures and teas. 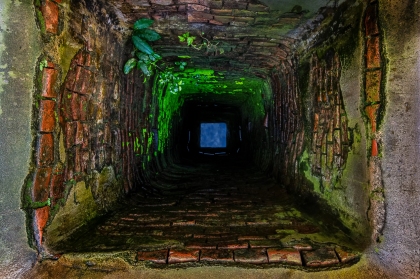 The Ba Le Well was built by the Cham people in the 10th century. Pulse News Mexico photo/Larry Anthony Pannell

Most Anthony Bourdain fans are already aware that Vietnam was one of his favorite places on Earth. Located in Hoi An was Bourdain’s favorite place to eat, a small store front and café called Bahn Mi Phuong. The city’s trademark sandwich is the banh mi, a sumptuous concoction of meat, fresh herbs and pâté, served on a French baguette. The sandwich can be found throughout Vietnam, but to have the best, according to the late Bourdain, you must come to Hoi An and the Bahn Mi Phuong Café.

If street food is your thing you will not be disappointed in Hoi An. There are plenty of food carts on the Walking Street across a small bridge spanning the river.

The streets of Hoi An are lined with shop after shop selling everything from tourist trinkets and T-shirts to custom-made suits. There are over 200 custom tailors in Hoi An that will whip out anything from silk shirts and suits for men and luxurious blouses, cocktail dresses and wedding gowns for women. You can arrive with a photograph from your favorite designer, and within a day or two have your order in hand at a fraction of the price. 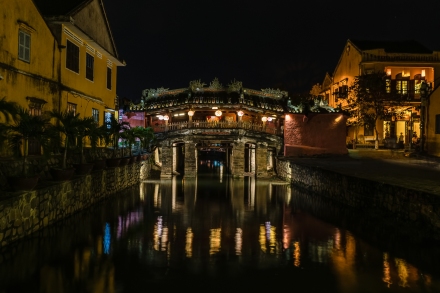 Accommodations in Hoi An range from modest hostels to mid-range hotels to five-star resorts. The last time I went, I stayed at a wonderful mid-range hotel named Hoi An Reverie Villas, and was pleased by my very large room, complete with a sitting area, balcony and large bath. It also had a nice breakfast buffet, swimming pool and patio for $26 per night. Located 1.5 miles from the Ancient City. Five-star accommodations can be found for approximately $50 to $70  per night.