When you close your eyes and imagine white sand beaches, warm crystal blue water, rugged mountain tops and lush green valleys, what specific place comes to mind? For me, it is the Society Islands of French Polynesia.

For many, life in Tahiti has changed little since Captain James Cook landed in 1769. Pulse News Mexico photo/Larry Anthony Pannell

The Society Islands consist of the nine islands and five atolls, and contained within the archipelago are Tahiti, Moorea and Bora Bora. They were named in honor of the Royal Society by Captain James Cook, the English explorer, after his visit to the islands in 1769, and this overseas territory of France received partial sovereignty in 1977.

Today, it is an overseas collectivity of France.

The largest of the islands is Tahiti, which hosts Papeete, the capital of French Polynesia, with a population of 184,000 inhabitants. 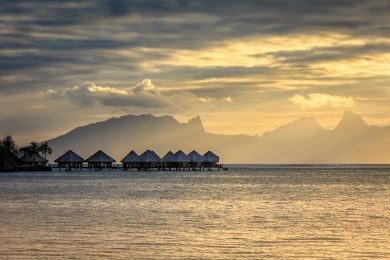 Once you get away from the hustle and bustle of Papeete, you will find that most of Tahiti is calm and relaxing. Pulse News Mexico photo/Larry Anthony Pannell

Tahiti is the buzzling economic, political and cultural hub of French Polynesia, and is usually the first port of call for foreign tourists since it has the only international airport in the collectivity.

If you are planning on purchasing black pearls during your visit, Papeete has the largest selection and some of the most reputable dealers (although prices are usually somewhat lower in Moorea).

French Polynesia is world renowned for its black pearls, known for their dark, iridescent shades of black and silver, capturing the entire spectrum of colors of the rainbow.

The sale of Tahitian pearls and tourism are the island’s main source of revenues. Pulse News Mexico photo/Larry Anthony Pannell

And although it is true that they take their name from Polynesia’s most well-known island, Tahitian pearls are, in fact, not cultivated in Tahiti, but rather elsewhere throughout the waters of French Polynesia.

Black pearls, which are named for the lip of the oyster (pinctada margaritifera-cumingi) that produces them and not for their own hue, can come in almost any shade, including peacock green, metallic gray, cobalt, cherry red and bright aubergine.

You can find lots of hidden coves and beaches across the island. Pulse News Mexico photo/Larry Anthony Pannell

Although some colors tend to be more popular than others, the value of a Tahitian black pearl is determined by its luster, size and shape, rather than its hue. Unlike Asian or freshwater pearls, Tahitian pearls are rarely round and can come in very unusual forms, including elongated drops and asymmetrical pear shapes.

Because the black-lipped oyster is very large, Tahitian pearls tend to be quite large, In fact, they are usually between 8 to 16 millimeters long, although they can be as large as 20 millimeters long.

Personally, I would not recommend staying in Papeete since it is rather rundown. I have also had more than one taxi driver tell me there are a fair amount of unsafe areas in the city.

That is not to say that the rest of the island follows suit. Within its 1,042 square kilometers, Tahiti has plenty of beautiful beaches, lagoons and a lush interior with numerous hiking trails to explore, as well as Mount Orohena, towering 2,241 meters above the sea.

Even if you don’t make it to Fautaua, there are plenty of little waterfalls tucked into the Tahitian landscape that you can explore. Pulse News Mexico photo/Larry Anthony Pannell

One of the top must-sees in Tahiti is Fautaua Waterfall, a natural sparkling water cascade that towers 985 feet into a large pool. But be warned, it is a long and ambitious trek through steep slopes and tropical jungle to get to, so if you decide to go, bring comfortable hiking shoes and plenty of mosquito repellent. (Also, the falls are sometimes closed to tourists due to heavy rains and other climatic concerns, so check if they are open before you go.)

If you are a surfer, Tahiti’s Teahupao is known as one of the best surfing beaches in the world. The island is also ringed with small villages and a range of lodging from budget hotels and guest houses to private home rentals and exquisite luxury resorts, my favorite being the Tahiti InterContinental Resort and Spa. 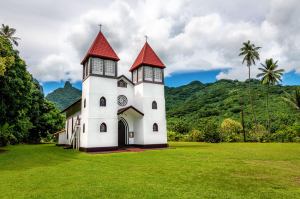 Moorea is the second largest island and only a 30-minute ferry ride or a 10-minute flight from Tahiti. There is no city on the island, but you will find a number of small villages and hamlets. There are many tour guides on the island that can show you the sights at a very reasonable rate. The advantage of a guide is you will not miss any of the highlights and you will learn of the rich island culture.

Another option is to rent a car and explore on your own. The advantage here is that you are on your own schedule and are able to stop and swim, have a picnic, dine at a café on the beach and take as much time as you like at any one location.

Moorea is the favorite of many visitors to the Society Islands. The only drawback is there are not many sand beaches to spread out a blanket on and enjoy the warm tropical sun. Instead, you will find a vast variety of lagoons to enjoy a swim along its coast. If you are an avid diver, you will certainly appreciate the multiple reefs surrounding Moorea that are inhabited by an array colorful tropical fish.

Those with an adventurous spirit might want to try diving with sharks and stingrays, one of the highlight tours of the island.

You may also decide to drive inland up a steep, well-marked road to the Belvedere Lookout. From this exceptional vantage point, you can get a bird’s-eye view of the island’s lush green Opunohu Valley 790 feet below and the surrounding mountain top of Mount Rotui towering above. The overlook also affords a wonderful view of Cook’s Bay, where Captain Cook first set foot on the island’s twin bays. 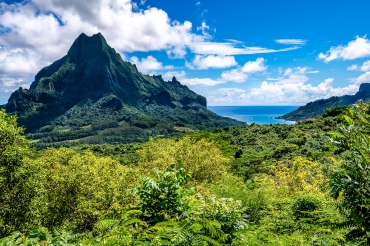 Smaller still than Moorea is the island of Bora Bora, which for many is considered the Pearl of the South Pacific. Each time I have been here, I have chosen to rent a car and take a leisurely drive the 22 miles of road that wind gracefully around the Bora Bora coastline.

There are two Avis car rentals on the island and the prices start at $100 for a small car. If you decide to rent a car, I’d advise making the reservation online well ahead of time since this is a port of call for many cruise ships and availability is often limited.

Each of the islands has its own unique personality, and unlike Moorea, Bora Bora has many white sand beaches to lay on and soak up the sun. Here too are large crystal clear lagoons to snorkel and wonderful reefs just offshore to dive and explore.

Bora Bora is the smallest of the three islands, but its beauty and grace are seemingly endless. Pulse News Mexico photo/Larry Anthony Pannell

The Lagoonarium, a massive outdoor aquarium specializing in lagoon fish and marine life, offers close encounters with sharks and stingrays in a controlled environment for those who didn’t want to risk an open-sea meeting in Moorea.

The beauty of French Polynesia is eternal and has forever been captured in the post-impressionist paintings of Paul Gauguin. But just between you and me, there are still so many unexplored nooks and crannies on the islands to dive the reefs, surf the waves, climb the mountain peaks and just lay on the beach and soak up the rays of the warm tropical sun that Tahiti, Moorea and Bora Bora can become secret personal Edens for every person who visits them.

And that’s what makes for a true paradise found.