Fashion and Beauty with a Purpose

We all want to look gorgeous and stylish in the latest fashions, and there is absolutely nothing wrong with that.

What you wear not only defines your fashion sense but also your relationship with the world around you. Photo: TUN.com

The clothes we wear, as well as the makeup and beauty products we use, are a personal expression of who we are and how we feel about ourselves.

But in today’s be-purposeful world, making a fashion statement does not exclude the option of making a social or political statement at the same time.

Ever since H&M first launched its Conscious collection in 2013, fashion that combats social injustices or raises awareness of global issues has moved way past the T-shirt with a slogan stage into full-fledged make-a-difference couture.

Whether it is through a donation-with-purchase program like Californian footwear giant Toms’ buy-a-pair-give-a-pair shoe scheme or a solid commitment to sustainability, ethical sourcing, recycling practices and cruelty-free platforms to fight against animal testing like those of the Body Shop, fashion and beauty companies around the globe are doing their part to help make a better world for all of us.

And the garments and products we choose to purchase allow us to be a part of that growing movement that lets us both look good and do good while proving that fashion and style can stand for a lot more than beauty.

Change You Can Wear

The European-based affordable clothing chain C&A has long been committed to sustainable production practices and ethical and eco-friendly manufacturing.

Now, it has taken that do-no-harm philosophy a step further with its new line Wear the Change, its first-ever fashion collection designed and produced using more sustainable materials from start to finish for men’s, women’s and children’s clothing.

The undisputed star of the collection is a Wear the Change T-shirt certified by the green-minded, Calfiornia-based nonprofit Cradle to Cradle (C2C) foundation that is made from recyclable organic cotton with a keen focus on sustainability, fair-practice supply chaining, reduced energy expenditures and natural resource preservation.

This first-in-class garment is so eco-friendly that even the stitching is done with organic thread. And as if all that were enough, C&A had included a Wear the Change organic pair of super-sleek, super-stylish denim jeans that not only fit your body perfectly, but also fit the environment.

Proclaimed the World’s Most Sustainable Jeans by C2C, which awarded it a highly coveted Gold standard, this very affordable garment (about half the price of those non-envirosafe Calvin Klein’s you’ve been contemplating buying) is composed of pollutant-free denim processed and manufactured using only renewable energy and strict social production standards.

And, it is especially designed for a circular life (which means it can be reused and recycled rather than landfilled).

C&A, which, btw, is the world’s largest buyer by volume of organic cotton, is also into local sourcing, and about 95 percent of all its denim jeans sold in Mexico are produced here at its Puebla plant, which means that, for the most part, buying a C&A garment is buying a Made-in-Mexico garment.

Avon, the direct sales beauty brand that has become synonymous with the fight against breast cancer, has now launched a new campaign in Mexico to help women defend themselves from assaults.

Nearly nine in 10 women in Mexico City are victims of assaults or other forms of violence. Photo: Avon

According to the United Nations Entity for Gender Equality and the Empowerment of Women (UN Women), 87 percent of Mexico City’s adult women say that they have been subjected to assaults or other forms of sexual harassment in the city’s public places and transportation systems, and a full 50 percent say they feel afraid during their daily commutes on mass transit.

Mexico also has one of the highest per capita incidences of femicide (the deliberate murder of women or girls because of their gender), with at least 227 cases reported in the first trimester of this year alone, up 15 percent compared to the same period in 2018-

Martial arts specialist Francisco Marroquín Monroy shows women how to protect themselves if someone tries to grab them during the Avon self-defense seminar. Photo: Avon

And while the only way to reduce the incidence of gender violence or harassment in Mexico and throughout the world is through public awareness campaigns and stricter law enforcement against those who perpetrate the assaults, Avon — a company that has for the last 130-plus years prided itself on being a company for and about women — has adopted a program to help potential victims in the meantime learn how to protect themselves.

As part of the Avon Promise to Help End Violence Against Women and Girls, the company offered a free self-defense class and conference on personal safety on Tuesday, April 23.

The class, which was offered to Avon workers and members of the media inside a private fitness studio in Colonia Polanco, was titled Girl Power and was the first in a series of seminars and workshops that Avon will be offering this year to women and girls across Mexico.

Avon has launched a special line of cosmetics and beauty products with all proceeds from sales going to help fight violence against women and girls. Photo: Avon

“The goal of these workshops is to arm girls and women with basic self-defense tools so that, if they find themselves in physical danger, they are able to free themselves and gain crucial time to seek professional help,” explained martial arts specialist Francisco Marroquín Monroy, who directed the class.

“The class is not intended to transform women into martial artists, but to help them to get out of a potentially dangerous situation and stay safe.” 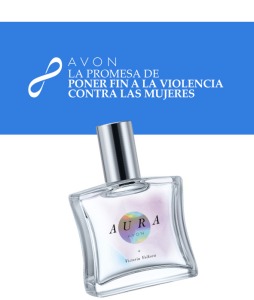 One of the items included in Avon’s special line of products to help raise money to fight violence against women. Photo: Avon

During the workshop, Lucía Bertin, Avon Mexico’s head of social responsibility and public relations, explained that the seminar was intended to encourage nonprofit associations, organizations and foundations aimed at helping to curb violence against women to participate in the company’s 2019 donation competition, as well as to promote the sale of special Avon products that help finance the brand’s Promise to Help End Violence Against Women and Girls program.

As of 1992, when the Avon Breast Cancer Crusade was first launched in the United Kingdom (and later extended to over 50 countries, including Mexico in 1994), the company has raised more than $800 million worldwide for breast cancer and uterine cancer research, treatment and screening.

The Artistry of Giving

Yet another company that gives back in a big way is Amway, the world’s largest direct sales company.

Since its founding in 1959, the Michigan-based, family-owned Amway empire taken a holistic approach to fulfilling its social responsibilities through organized charitable activities around the world that help those in need, particularly children.

As of last year, Amway’s lifetime had donated more than $1.2 billion through its Helping People Live Better Lives mission and One by One campaign.

Amway also supports important causes through its products, including Nutrilite Little Bits micronutrient packages that have helped improve the health of children worldwide.

Here in Mexico, Amway has concentrated its efforts on eradicating hunger and malnutrition in children under age 5 by the year 2023 through an integral approach that gages nutrition inputs, anemia and neurological development, while encouraging early learning schemes and proving safe drinking water.

Amway is also working in tandem with Mexico’s Salvador Zubirán National Institute of Medical Sciences and Nutrition and the Un Kilo de Ayuda (One Kilo of Help) program to improve the health of the country’s most underprivileged children.

And Amway is working with the José A. Llaguno Foundation to fight malnutrition and provide better access to educational and medical facilities for 270,000 indigenous children in the Sierra Tarahumara, as well as helping to build homes for low-income families through Habitat for Humanity.

In addition to its core Nutrilite vitamins and supplements, Amway has a quality Artistry skincare line that draws on ingredients from its own Nutrilite organic farms and its exclusive scientific technologies to develop high-performance beauty solutions.

Artistry’s latest new product is a Signature Select Personalized Serum that allows every woman to create her own especially customized elixir to target her top skincare concerns.

Whether her concerns are sunspots, wrinkles and saggy skin or a dull, acne-prone complexion, this personally tailored, powerful, triple-action serum delivers extraordinary results that dramatically improve skin’s appearance in just a few weeks use.

Each serum is prepared by the user herself, mixing in three of five different amplifying pods into a botanically enriched base.

The pods are selected according to the user’s three biggest skincare concerns.