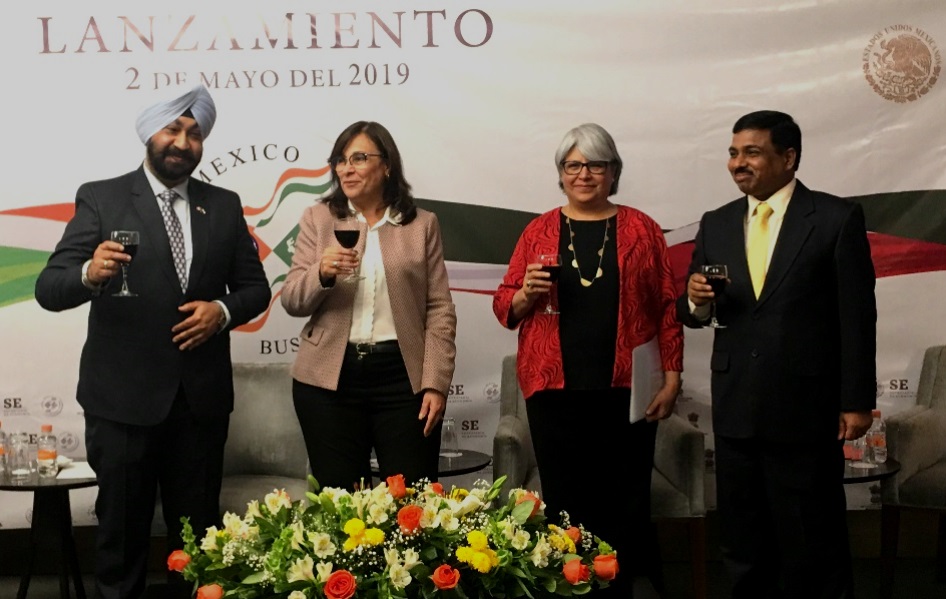 As part of an ongoing bilateral effort to promote greater two-way trade and investment, the India-Mexico Business Chamber (IMBC) was launched on Thursday, May 2.

“Over the course of the last 10 years, there has been a void in terms of a formal business chamber to help facilitate our rapidly growing binational commercial and financial ties,” said Singh, referring to the fact that in October 2006, an earlier version of the India-Mexico Business Chamber was established in Mexico with the help of the Indian Embassy, but fizzled out after just a few years.

“But now, with the new Mexican government (of President Andrés Manuel López Obrador, or AMLO, as he is affectionately known by his followers), this is the ideal time to establish the new IMBC to take advantage of business opportunities for both our countries.”

Singh pointed out that in the last three years, combined two-way trade has grown at an unprecedented rate to reach a total of more than $10 billion in 2018.

“Today, Mexico is India’s largest trade partner in Latin America, and our second-largest in all of the Americas,” said Ambassador Pardeshi.

“In the last 10 years, our combined trade increased by 240 percent, and just in the last three years, it grew by 74 percent.”

Pardeshi went on to note that 2015, when combined bilateral trade amounted to just under $6 billion, India did not even figure in the roster of major Mexican trade partners.

Among India’s principal exports to Mexico are vehicle and automotive parts (representing about $1.7 billion a year), information technology, electronics, pharmaceuticals and textiles.

In return, Mexico sells India petroleum (which makes up about 75 percent of Mexico’s export portfolio to India), machinery, fertilizers and chemicals.

In terms of investment, Pardeshi said that there are now nearly 160 Indian companies with capital holdings in Mexico, worth about $3 billion and providing jobs for more than 30,000 workers.

Mexico has a total of 12 major investors in India, with accumulated holdings of about $800 million, including Cinépolis, Gruma, Grupo Bimbo, KidZania and Nemak.

Pardeshi said that the pro-business government of Indian Prime Minister Narendra Modi considers Mexico a “strategic” partner and is eager to work with the AMLO administration.

He also said that Delhi hopes to receive the Mexican president in an official state visit “in the coming years.”

Although there is no free-trade accord between the two countries, numerous bilateral agreements have been signed in the fields of economics, investment, air services, education, science and technology, extradition, tourism and culture.