Land of Fire, City of Wind 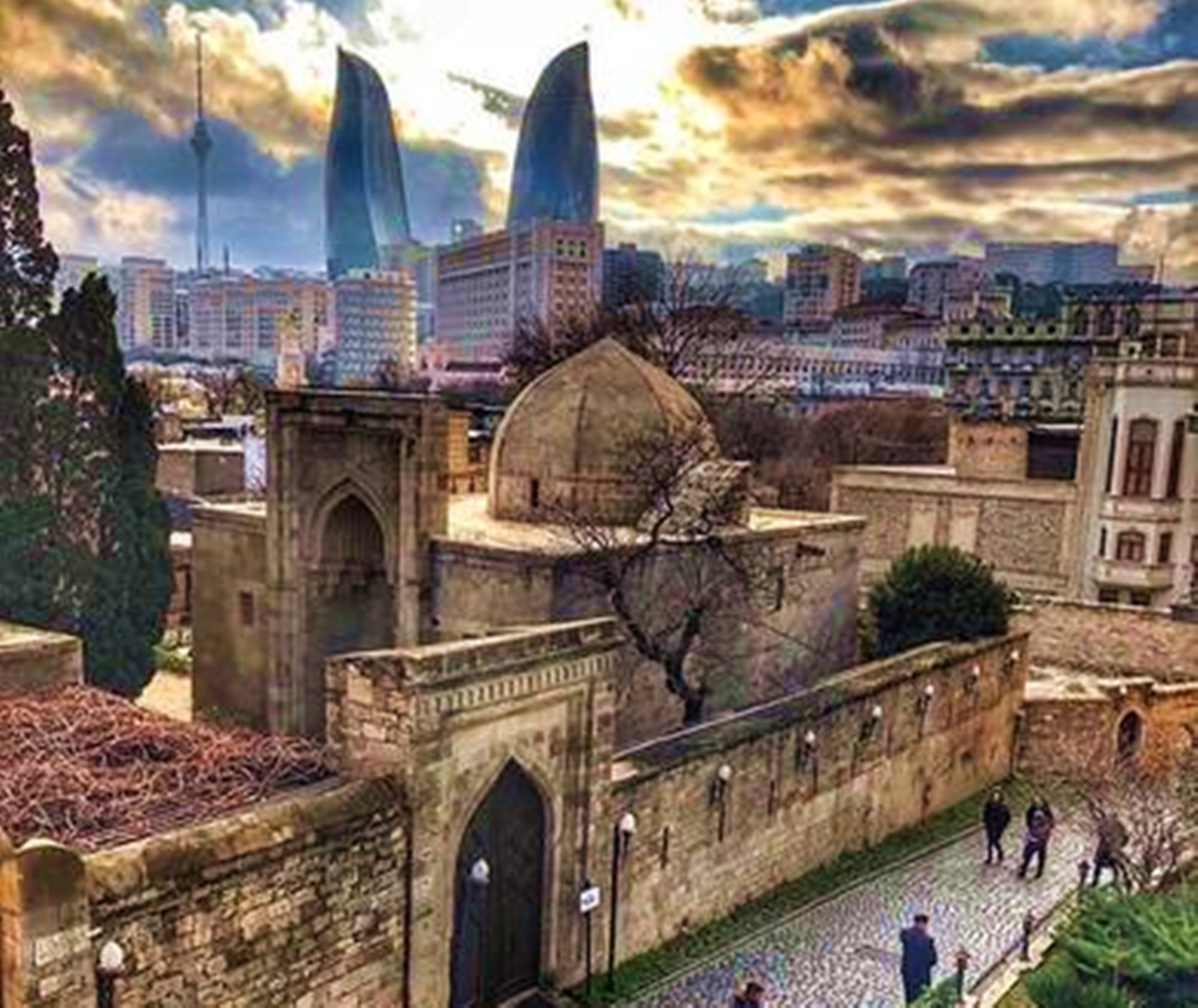 BAKU, Aizerbaijan — When it comes to bone-chilling winds, Chicago has nothing on Baku.

Situated on the southern side of the tip of Azerbaijan’s jutting Absheron Peninsula, the ancient Azeri capital is almost constantly battered by chilling, triple-digit-velocity gusts from the Caspian Sea, tempered only by warmer overland breezes from the inland regions of the country to the west. 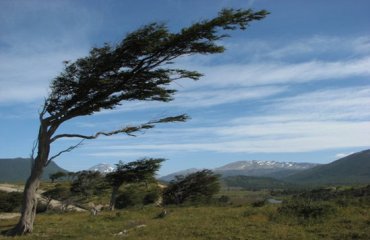 In the summer, when temperatures can reach 32 degrees Celsius, Baku’s winds are — quite literally — a breath of fresh air, cooling and refreshing, while also helping to sweep away chemical pollution from the city’s omnipresent oil wells and refineries (which is a godsend, given that Baku is located 92 feet below sealevel and could otherwise become a basin to trap contaminated air).

Ah, but in the winter, when temperatures often drop to below freezing, the city’s winds can cut through you like a chilling sabor of ice and practically knock you off your feet.

But as cold and brutal as Baku’s winds may be, they are a crucial part of the city’s identity and have played a major role in the nation’s extraordinary and uncanny history.

For not only is Baku the “City of Winds,” but Azerbaijan is the “Land of Fire,” and it is this exceptional mix of wind and fire that made the country the birthplace of one of the world’s oldest and most advanced civilizations, with what are believed to be one the earliest examples of cave art anywhere on Earth. 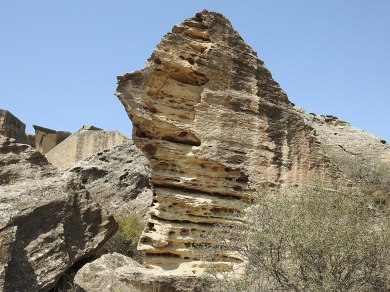 To fully comprehend the role of fire in Azerbaijani history, you must to first understand it’s unique physical geology.

Part of a constituent geological section of the Alpine fold belt, over half of Azerbaijan (including Baku) is composed of rugged limestone mountain ridges, peaking crests, towering rock formations and vast, almost-barren plateaus that can rise to hypsometric levels of up to 1,000 meters.

And underneath this stark landscape lies massive quantities of light, sweet crude oil and natural gas — so much natural gas that it forces its way to the surface and gushes out of the mountainsides, where electrical storms and sporadic bolts of lightening frequently ignite it into fire (hence the moniker “Land of Fire).

And here is where those indominable, perpetual, gusty Azeri winds come into play.

Stirred by the frosty gusts of the Caspian Sea, the “burning mountains” of Baku and its surrounding areas allowed earliest man to cultivate and dominate fire, permitting him to cook his food, warm his caves and, yes, have light to produce those first primitive works of human expression. 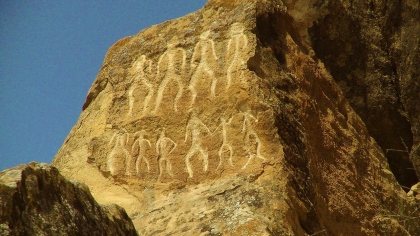 The engravings of Gobustan include human figures, as well as a variety of animals and a rudimentary perception of dimensional art. Photo: Guided Azerbaijan

The cave art of Gobustan, a now-arid and abandoned collection of caverns and rocks located just one hour to the southwest of Baku, includes more than 6,000 engravings and paintings  dating from between 20,000 and 3,000 B.C.

And while the Gobustan petroglyphs are not as old as those found in the Franco-Cantabrian region of western Europe (dating from about 35,000 years ago), they are far more sophisticated and complex.

The earliest human settlers of Spain and France etched out only geometric stick-figure images of animals on the caves of Cantabria, but the engravings of Gobustan include human figures (men, women and children), as well as a variety of animals and a rudimentary perception of perspective art (images of people who are supposed to be closer are portrayed as larger, and those who are supposed to be further away are smaller).

In some of Gobustan’s cave paintings, men are seen dancing and hunting, while women are shown gathering plants and caring for their young. Some of the women are even depicted as pregnant, perhaps as symbols of fertility. 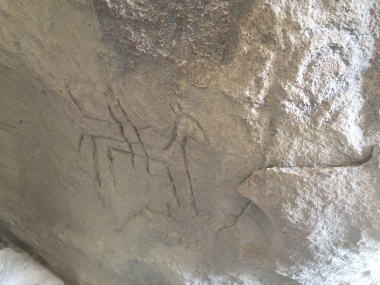 And while Gobustan — a UNESCO World Heritage site since 2007 — was the cradle of Azeri civilization, the region’s wind-bolstered fires also gave birth to the culture’s earliest religion, Zoroastrianism.

Founded by the prophet Zoroaster some six centuries before Christ, Zoroastrianism was based on the statutes of good thoughts, good words and good deeds, and at its core was fire — the cleansing, eternal fire of the earth, the fire that, in ancient Azerbaijan, was fed by the soil’s rich natural gas and heightened by the sky’s interminable winds.

Ateshgah, just 30 kilometers from the heart of Old Baku in the town of northern suburb of Surakhany, was one of the most important Zoroastrian temples, dating back to 200 A.D., and it also became a crossroads of merchants and pilgrims who traveled the Silk Road from India and China.

Many of these travelers (particularly Jains and Sikhs) eventually settled at Ateshgah, bringing with them their own brand of fire worship and setting the stage for Azerbaijan’s extraordinary multiethnic identity, tendency for universal hospitality and unparalleled religious tolerance, welcoming people from nearly every conceivable religious and sect. 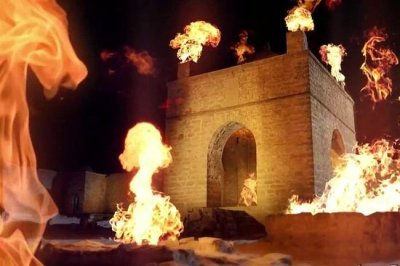 The flames of Ateshgah still burn today (although they are now fueled by pumped-in gas rather than the natural hydrocarbon that for centuries lit up the temple).

The Zoroastrians are also accredited with having built Baku’s renowned Maiden Tower, the city’s premiere landmark and the iconic modern-day symbol of Baku.

The 28-meter-high cylindrical structure is believed by some to be as old as Zoroastrianism itself, and has, over the centuries, served as a religious monument, military stronghold and makeshift lighthouse for sailors heading in from the Caspian.

And it also has strong links to the country’s fiery past.

Shrouded in mystery, the Maiden Tower is associated with numerous Azeri legends and myths, including one about a beautiful warrior princess with fiery red hair who saved her people from slavery by overcoming an invading army with her military skills and then, through her beauty, persuading its general to provide protection for the city’s residents. 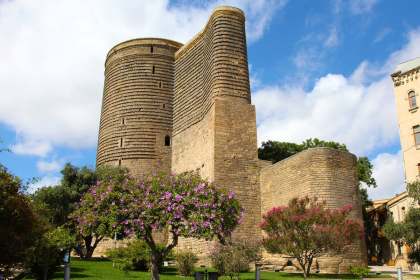 Shrouded in mystery, the Maiden Tower is associated with numerous Azeri legends and myths. Photo: Iternari

There is also a myth about how Azeri warriors were holed up in the temple and were on the verge of starvation when the burning flames on the building’s top created an earthquake and sent the invading enemies packing.

Even in modern Azerbaijan history, fire and wind — particularly, fire, or at least the gas and oil that fuel it — have played an important role in determining the country’s destiny.

It was in Baku — specifically at Ateshgah — that the Swedish Nobel Brothers Petroleum Company, founded by Ludvig Nobel and Baron Peter von Bilderling, first began to build their empire by trading in Azerbaijani oil.

Back in 1847, Nobel began drilling the petroleum-rich soil of Azerbaijan (establishing the world’s first large-scale industrial wells) and opened its first refinery in Baku in 1863.

In the years that followed, Azerbaijan became a watershed in oil technology, building the first offshore drilling platforms and pioneering the first transnational oil ducts. 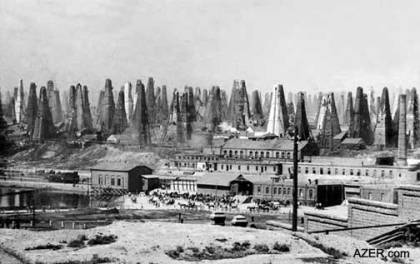 Today, Azerbaijan boasts a daily productions of about 873,260 barrels of crude oil per day and 29 billion cubic meters of gas per year.

And there are still places in the country, such as at the “Burning Mountain” at Yanardag, just 25 kilometers to the north of Baku, where Azerbaijan’s natural gas forces its way through the parched limestone rocks to ignite into flames, fanned by the incessant and hammering winds from the south.

Indeed, Baku will always be the City of Wind, and Azerbaijan the Land of Fire.