Lunch on Fiji: A Tale of the South Pacific

What in the world could Thomas Baker have been thinking when he started fiddling with a hair comb worn by a Fijian chief in 1867?

After eight years on the islands, the English missionary should have known that touching the head of a chief – especially a cannibal chief – is a huge no-no in Fijian culture. 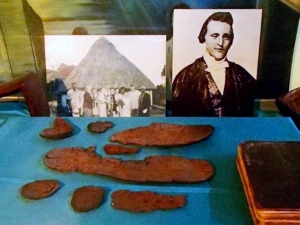 So it’s no wonder he wound up as lunch that day.

Ditto for the eight guys who came with him to Nabutautau, a little hamlet in the remote highlands of Viti Levu, the largest of Fiji’s 300 islands.

Fast forward to today, and you can see what’s left of Baker in a museum in Suva, Fiji’s capital.

Mosey around the Fiji Museum’s old-time dugout canoes, rusting rifles, battle clubs, artworks, masks, musical instruments, history charts and the like, and you’ll come across an odd-looking glass case spotlighting what looks like chewed up pieces of bark.

The significance of the display is that the Baker luncheon was the last recorded incident of cannibalism on the Fiji islands.

Before then, the local folks had earned quite a rep for chowing down on just about anything that moved.

English explorer James Cook sailed by there in the 1770s, but he didn’t go ashore on what was then called “the Cannibal Islands.” And Captain Bligh’s longboat crew kept rowing past the islands after they were booted off the HMS Bounty in 1789. Bligh noted in his logbook: “I dare not land (on Fiji) for fear of the natives.”

Such reports helped keep the islands off the bucket lists of all but a handful of the era’s gunrunners, whalers, sandalwood traders and escaped convicts from Australia. Likewise, missionaries zeroed in on saving souls elsewhere in the South Seas, such as on New Zealand, New Hebrides (now Vanuatu) and Tonga.

In the 1830s, stories about the stewpots of Fiji finally brought a tsunami of pastors to the islands from the London Missionary Society. Progress was slow at first, and a good number of soul-savers themselves ended up saved — for Fijian feasts.

The missionaries’ big break came in the mid-1800s when the Methodists were able to convert a super-chief named Cakobau, and with him most of Fiji.

Maybe it was a longstanding touch of guilt, or perhaps because the villagers of Nabutautau had run into hard times, but in 2003 they invited 11 of Thomas Baker’s descendants to a traditional Fijian matanigausau ceremony to tell them they were sorry for what happened 136 years earlier.

Said village chief Filimoni Nawawabalevu, “We believe we must have been cursed, and we must apologize for (eating Baker) … when we have made the apology, we will be clean again.”

To seal the apology, the villagers erected a monument in Baker’s honor in Nabutautau’s town square. It’s still there.

Fiji’s 100 or so inhabited islands host some 800,000 annual visitors, most of whom stay in 100 or so tourist-class resorts and inns. A hefty number of the properties feature luxury thatched-roof bure huts popping out of the jungle on Viti Levu and on boutique resorts peppering the out islands.

NOTE: Sadly, Bob Schulman, who was one of the most esteemed and respected travel writers in the United States and a founding member of Pulse News Mexico, passed away on Dec. 28, after a courageous battle with cancer. This story was filed with Pulse News Mexico prior to his death. We will all miss him and his extraordinary writing.